NOTE: This Congressional Electability Percentages (CEP) Daily Data Report is included in the two-part, comprehensive, online subscription which includes this Report and the "Congressional Coalition Builder Daily Data Report." See Products tab for this title for details on this part of the Report.

The Data Source for the Congressional Electability Percentages Report (CEP) Report Is YOUR Validated Constituents ̶ the American People.

Report Content: This CEP Report is an anonymous aggregation of the percentages of constituents' Yes/No votes in answer to the question: "Would You Re-Elect Me Today?" This Report is published as a daily, electability percentage and is available by subscription for each member of Congress, media, and cause-based organizations.

FYI: As a Member of Congress, YOUR eVA Daily Majority Percentages
on issues and YOUR electability standing) will be public information
on 1) eVA's site, 2) through its subscription Reports
a) to ALL Members of Congress and POTUS, and b) to major media outlets

Because this daily, online CEP Report is simultaneously available to ALL members of Congress, ALL members can know what each others' constituent majorities are telling them daily as their Electability Percentages. Additionally, media and cause-based organizations will know as well.

How to Use the CEP Report to Create Legislative Coalitions Prior to a Vote:

With this first-ever CEP data, Members with 51+% electability percentages can band together to:

How Congressional Electability Percentages Are Generated Onsite by eVA users:

ONCE A DAY, eVA users, as validated constituents, answer this question: "Would You Re-Elect Me Today?" This feature/vote is a part of the eVA's opinion-submission process and is only available on the user's first opinion of the day. This built-in limitation of one vote per day per constituent prevents users from "stuffing" the ballot box.

Value of eVA's "Would You Re-Elect Me Today?" Onsite
Feature to the American Public and Good-Faith Elected Reps 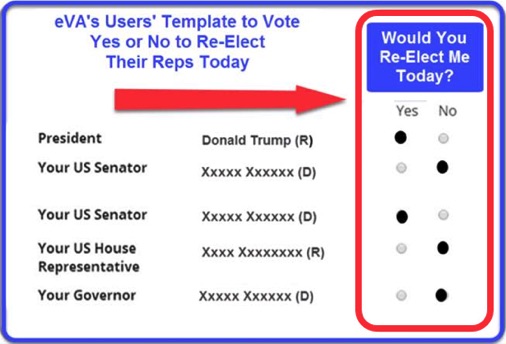 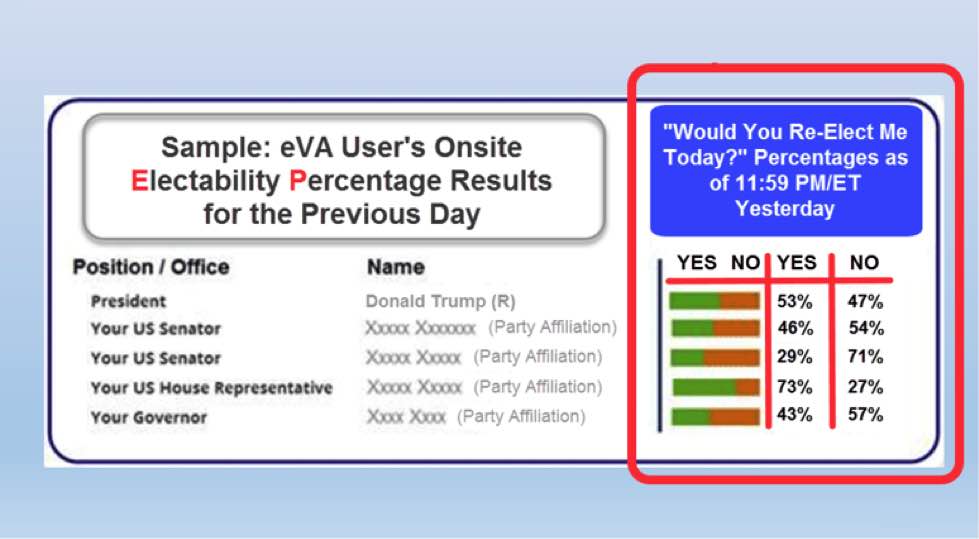 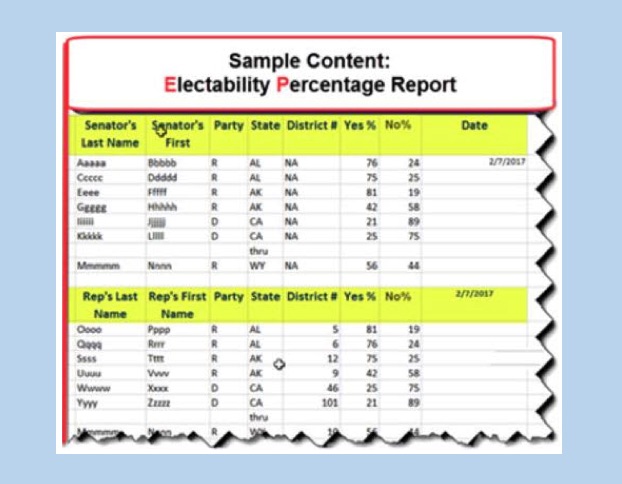 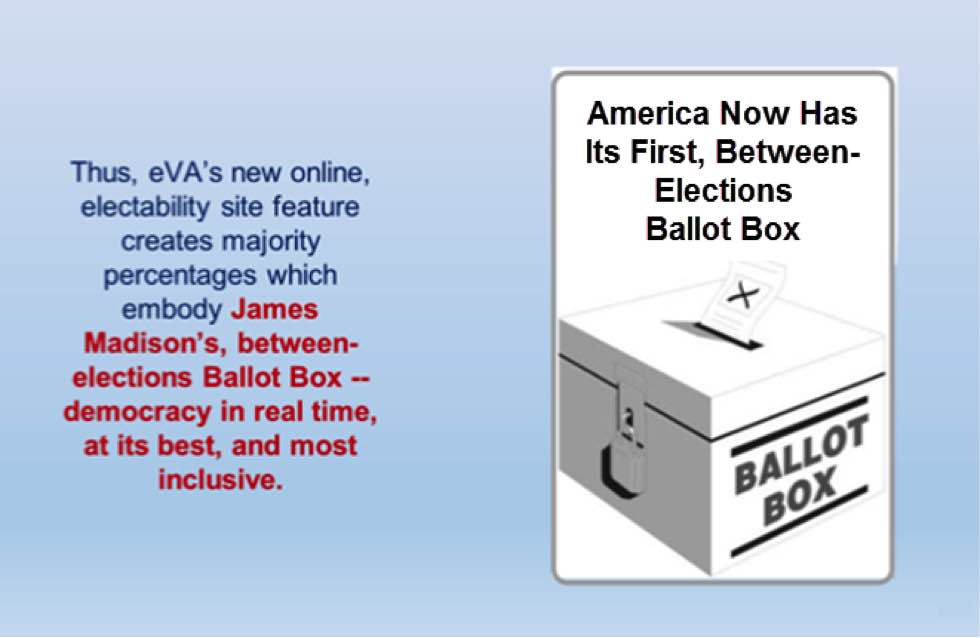 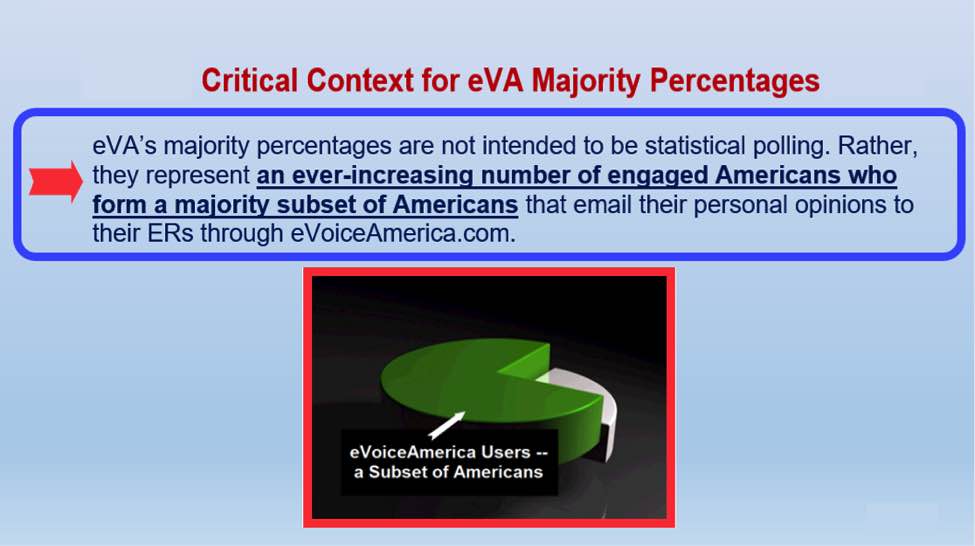 After a Legislative Vote, NEGATIVE Consequences to Those Who Ignore Their Constituent Majorities AFTER Floor Votes

Good-faith elected reps and the honest media can target and expose those who voted against their constituent majorities in favor of their party and or personal agendas...

POSITIVE Consequences to Members
Who Use CEP Report Data to Vote Their Published,
Constituent Majorities and Build Coalitions


Like the Above POSITIVE Consequences? Here's How They Can Happen for You:

Suggest an Issue: eVA is open to issue suggestions from elected reps. Email them to info@evoiceamerica.com

So...
The "good guys," who vote their constituent majorities,
have nothing to worry about.

The "other" guys? Well... They might need to do some serious
introspection about their Congressional responsibilities
Constitutional roles, and elective futures, now that
THEY KNOW THAT WE KNOW WHAT THEY KNOW 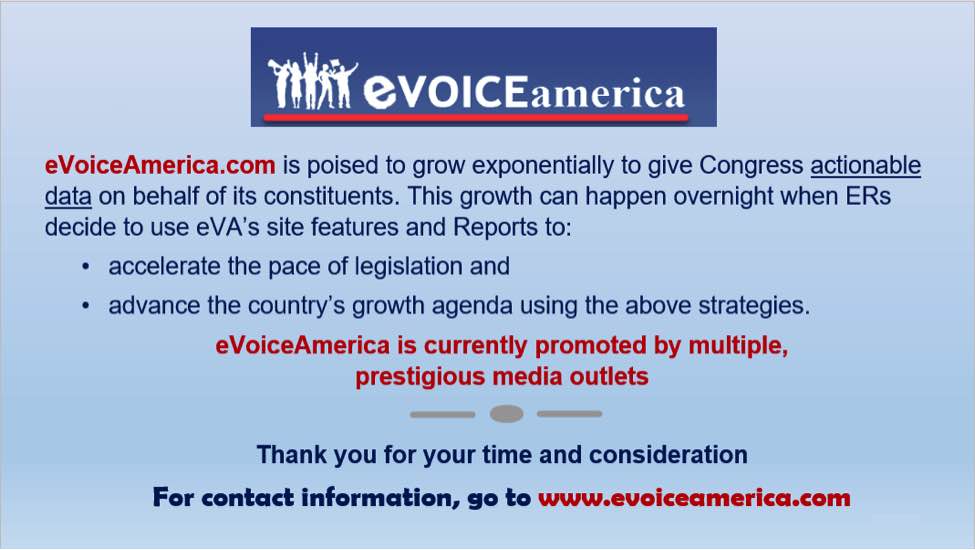