When: Saturday, August 15, 2020 – Just Before the Republican National Convention

Now all Americans have a specific time and local venue to participate in a national, peaceful rally to protest, be Seen, Heard, and Counted, in the Millions, to Unitedly Oppose and Push Back Against the Accelerated, Destructive, Tyrannical, Seditious, and Violent Tactics of the Far Left – 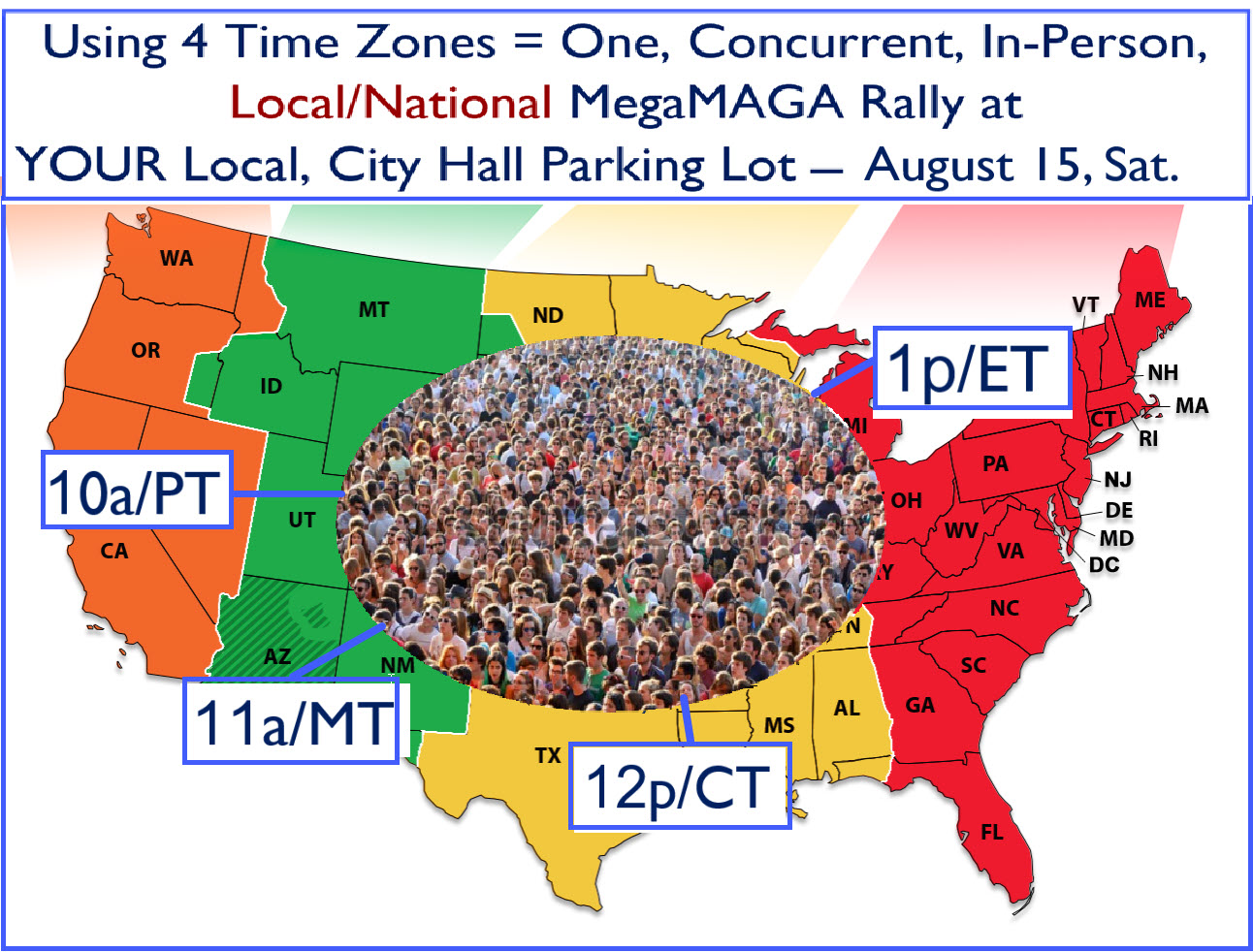 Rally Video for Media Use

Rally Video for Members of Congress


Rally Description: Using sequential, yet simultaneous, time zones, Americans can now meet locally in the parking lots of each city hall; on a Saturday when city halls are closed. Thus, all concerned, pro-America citizens can gather locally at the same time nationally, to massively and peacefully protest America’s ongoing, deepening destruction by the Far Left: the tyranny of a very small minority.

Americans can bring signs, flags, megaphones, to speak out and find strength in numbers locally and nationally. They can also take videos of the rally and upload them to YouTube to document the crowd sizes for the media.

This national mega MAGA rally would inspire courage and create the determination that would solidify millions of moderate and conservative Americans to fight the far left and support President Trump’s re-election, in historical numbers; again, all at the same time in one, national, unifying rally.

How: Combined, LogMeIn and eVoiceAmerica.com have the technical capabilities and platform to support and promote a national rally to be held simultaneously at local city halls at 10a/PT, 11a/MT, 12p/CT, and 1p/ET on Saturday, August 15, 2020, just before the August 24 Republican National Convention. Another one or two could be scheduled before the November election to show added support for President Trump’s re-election and against the Democrat / Leftist / Socialist agenda. 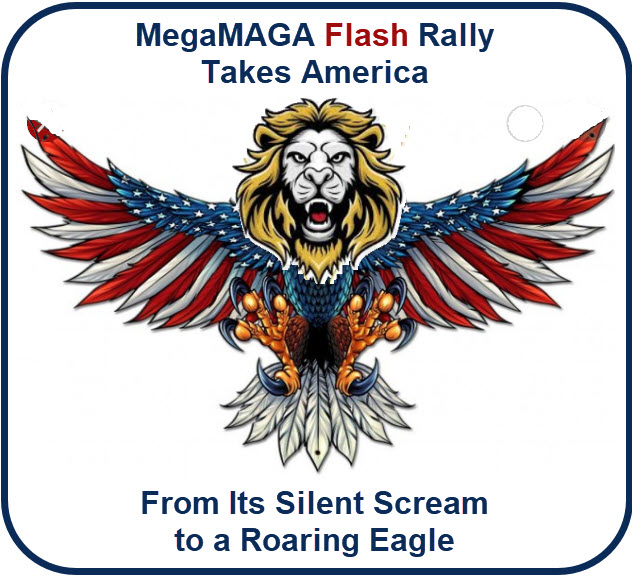 Promotion: The success of this non-profit rally depends upon promotion by 1) national, conservative media outlets as a news item or within commentary, 2) major conservative advocacy groups; 3) Republican members of Congress, 4) local media, and 5) local organizations and business, and 6) pro-America citizens, as explained below.

1) National, conservative media outlets: This information is being emailed to a long list of these outlets for inclusion in their coverage, as a counter balance to the coverage of the “rallies, protects” of the far left, anti-America destruction and violence.

During and after the rally, using YouTube-attendee videos, conservative media and advocacy groups can broadcast a panorama of hundreds of city halls deluged by devoted Americans who love their country and demand change. This will increase the goodwill and ratings for media outlets covering these rallies.

2) Prominent Conservative Advocacy Groups: This information is being emailed to a long list of reputable conservative advocacy groups to help them further their conservative, pro-American agendas and efforts. This will enable them to promote this rally to their members on their websites, in their newsletters, etc.

3) Members of Congress (MOCs) can subscribe to the LMI / eVoiceAmerica Constituent-Only Webcast Town Halls. These town halls would be the ideal platform to inform and promote this rally to their constituents and encourage their attendance. MOCs can then personally attend one of the rallies in their states and districts. MOC staff members can also work with local leaders to set up their rallies with podiums, microphones, megaphones and some modest signage.

MOCs Can Get Involved Early and by Taking Timely First Steps

To become involved to save our country AND achieve political benefits, subscribe to LogMeIn / eVoiceAmerica’s Constituent-ONLY Town Halls:

a. Go to www.evoiceamerica.com > Products tab > Virtual Town Halls to view a video and learn how your constituent-ONLY, webcast town halls can influence the success of this rally and increase your goodwill and electability.

c. How MOCs Can Promote This Mega MAGA Rally to Their Constituents:

ii. Using their subscription, they hold unlimited webcast town halls of 5500 attendees promoting this Mega MAGA Rally AND their own, re-election issues.

4) Local news media: When local media outlets learn of this rally from the national news media, they can go to Mega MAGA Rally for more information.

5) Local organizations and businesses can inform their members and customers of this rally in support of law and order, private property, the right to livelihoods, free markets and religious assembly and speech. To the extent they can, they can provide podiums, megaphones, microphones, and modest signage.

6) Individual citizens can show up with posters, flags, placards, and cell phones to video the rallies to post on YouTube.

7) President Trump can learn the true depth and breadth of his support by the American people based on the rally turnout. This national rally potentially will be greater than any previous, stadium-based Trump rally. The President can attend one of the local rallies in person and re-commit to make America great and safe again.